Carbon fiber is incredibly stiff. And this stiffness makes carbon fiber the ultimate material for the facings and cores of pickleball paddles because it gives you incredible control over where your ball goes.

Stiffness is the ability of a material to resist deflection or deformation. So when you hit the ball with your carbon fiber pickleball paddle, the ball is less likely to deflect in a direction you had not intended. You will have less mishits and more true shots.

Almost all pickleball paddles today use a honeycomb core. The vast majority of these cores are made from polymer, making them very similar. These cores are sandwiched between two thin layers of material, either fiberglass, graphite or carbon fiber, making them very different. Carbon fiber has a five times greater stiffness to weight ratio when compared to fiberglass and is much stronger than graphite, which breaks apart easily.

There are a few paddles that use carbon fiber for their facing. PICKLRZ carries the Cheetah Predion E16 and the Diadem Warrior pickleball paddles. These paddles are also a thick paddles, which help absorb the shock of the pickleball and minimizes twisting of the paddle in your hand. You can learn more about paddle thickness by reading Why Thick Pickleball Paddles May Improve Your Game. 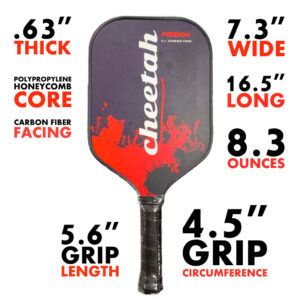 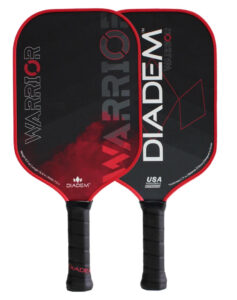 We also carry the Gearbox 100% carbon fiber pickleball paddles. Not only does the paddle utilize a carbon fiber facing, but there are 32 carbon fiber rods that make up the core. This is a huge innovation beyond traditional pickleball paddles having a polymer honeycomb core that can break down, develop dead spots and become unglued. Plus, the Gearbox paddles are edgeless and eliminate edge guard mishits. And because they also use a carbon fiber core, they absorb shock better than paddles with polymer honeycomb cores. This allows them to remain thinner, giving you better hand speed at the net. You can learn more by reading Is Gearbox the Tesla of Pickleball Paddles?

Time to Nerd Out

Some people think graphite and carbon fiber are the same thing. They’re not.

According to an article by the Department of Polymer Science at the University of Southern Mississippi, graphite is pure carbon with its atoms arranged in big sheets of hexagonal rings. The article compares them to chicken wire. Carbon fibers differ in that they are a polymer which is a type of graphite. A polymer is a chain of carbon atoms that are connected to one another. The polymer must undergo a process to become carbon fiber that makes it different than graphite.

According to the University of Bristol, carbon fibers are very strong, despite their lack of density. Both graphite and carbon fibers are inert and unreactive; this explains why graphite in lead pencils does not react with paper, and the carbon fibers in tennis rackets do not interact with the other components of the racquet.

We setup a reloable, digital gift card for you and seed it with $5.

You share your coupon code with friends, save them 5% and get 5% added to your gift card.